How to Build It!

Promote Your Page Too

New Video about the history of Free Radio Berkeley!

Free Radio Berkeley offers a wide variety of kits, accessories and all the other equipment needed to
create and establish a community FM or TV broadcast station. Visit our store site and check it out

As of January 2017, the Free Radio Berkeley project was 24 years old. We keep our prices low so that most anyone can afford to have a voice - and offer technical support, classes and training as well. In order to continue our efforts to preserve and expand Free Speech on the airwaves through rather difficult economic and political times, your financial support is needed. Please make a donation to Free Radio Berkeley.

Free Radio: How to do it!

We will be adding further instructional videos and slide shows on both Free Radio and TV. Go the technical libary section. Some of the currently available documents:

Liberating the broadcast spectrum through electronic civil disobedience and being a voice for the voiceless defines the essential nature of Free Radio. Click here for the essay by Stephen Dunifer

A four day DIY workshop session sponsored by Free Radio Berkeley in which you learn how to build either a 10, 40 or 150 watt FM broadcast (88-108 MHz, standard FM band) transmitter (and other related items such as antennas) and set up a low power community radio station capable of covering a broadcast radius up to 10-15 miles depending on terrain and antenna height.

With an emphasis on direct, hands-on learning, you will learn how to solder, identify electronic components, assemble an FM broadcast transmitter from a kit of parts, build and tune an antenna, properly setup and test broadcast equipment and much more. Further, you will be given an overview of basic electronics and broadcast engineering.

Make Radio Not War! Restore media democracy and break the corporate stranglehold on the free flow of information, ideas, art and cultural expression by establishing an FM broadcast station in your neighborhood or community. Contact Free Radio Berkeley for any question or further information. 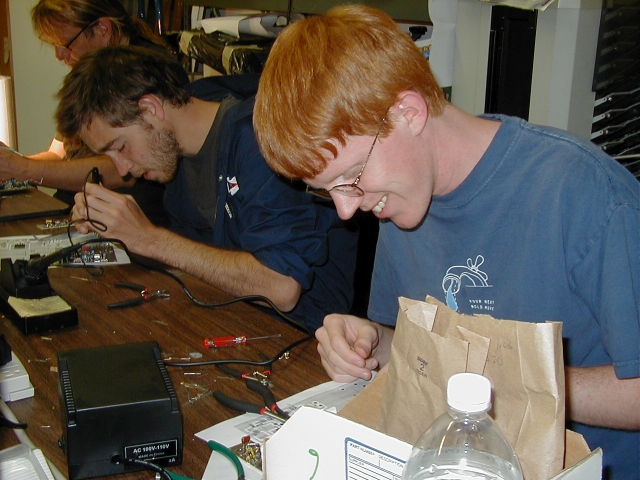 Transmitters Uniting the Peoples of the Americas
Free Radio Berkeley's International Project
check it out!

All packages include transmitter, power supply, Comet 5/8 ground plane antenna and 50 feet of low loss coaxial cable. The Comet antenna has a power gain of 2. This means that the antennaa effectively doubles whatever power is fed to it. If you wish to double the radius of coverage, the power has to be increased by a factor of 4 and the antenna raised to a height that will provide the required distance to horizon. FM transmission is line of sight - both the transmitting and receiving antenna must be able to "see" each other. The radius of coverage as stated above assumes average flat terrain with an antenna positioned at least 40 to 50 feet (12-15 meters) above the ground. As it is said, "You mileage may vary".

These are plug and play packages. Add an audio mixer, compressor limiter, microphones, etc. for a complete radio station. In many cases, with the proper hardware and software a computer system can provide most of these functions. Cue up a mix of mp3/podcast content, live streams, etc., feed the audio output from the computer to the transmitter and bring fresh voices, news/information and music to your neighborhood and community. Visit our store to order today!.

A Popular Guide to Building A Community FM Broadcast Station - a graphic guide written and illustrated by T.J. Enrile

Visit our store to order in English or En espanol

Moving Onto the Airwaves - A Free Radio Illustrated Manifesto

The first book to document and emphasize the myriad voices of the free radio movement, from Black Liberation Radio in Springfield, Illinois, to Free Radio Berkeley in Berkeley, California. The first section, "Media Monopoly And The Rise Of The Free Radio Movement" includes contributions from Robert McChesney on the political economy of radio in North America and a history and analysis of the burgeoning pirate radio movement. The second section, "On The Air," includes interviews with and commentary by some of the key grassroots participants in micropower broadcasting worldwide—from Canada, Holland, Haiti, and Mexico, as well as America. The final section of the book consists of a comprehensive technical guide and how-to manual for going on the air, complete with schematics and "sound" advice. Published by AK Press.

Purchase from our store for $12.95. On line version available here. 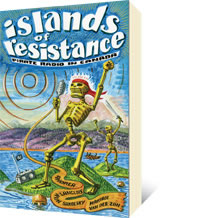 While only recently have we heard the major networks broadcast warnings of rising sea levels, since radio’s invention certain Canadians have been concerned by the increasingly centralized medium and its commercial flooding of the airwaves. Occasionally alone, frequently in teams and always illegally, these activists are islands of resistance within theocean of homogenous frequencies, pirating radio signals for personal, political and artistic expression.

In the first book published on the subject, Islands of Resistance gives you a view from the crowsnest of the phenomenon of pirate radio in Canada. Here is a collection of seventeen activist manifestos, artistic treatise of intent, historical essays on the development of radio and its regulatory bodies, sociological examination of pirate radio’s application in new social movements, and personal anecdotes from behind the eyepatch.

Just as the new media ostenibly renders the old obsolete, Islands of Resistance unveils the existance of a thriving clandestine counterculture. An invaluable addition to an unscrutinized subject in Canadian media studies, Islands of Resistance appeals to the anarchist, anti-authoritarian impulses inall of us.

Pirate radio is everywhere in London, born in the 60âs from rusting anti-aircraft towers in the mouth of the Thames. Todayâs broadcasts are hidden in plain sight, transmitting from secret tower block studios via homemade rooftop antennas.

In July, 2008 Federal Police attempted to shut down Radio Nomndaa located in the Mexican state of Guerrero but were prevented from doing so by the community standing in solidarity to protect their community radio station. So far, the station remains on the air. En Espanol

With the transition from analog to digital TV broadcasting underway, it is now time to “Turn on, tune in and take over” the soon to be vacant analog TV spectrum. Finally, guerilla media activists will be able to say:

Free Radio Berkeley’s engineering staff have designed and developed low power VHF and UHF transmitters by the creative use of off-the-shelf technology. So far, design engineering efforts have yielded TV transmitters capable of reaching a distance of 4-5 miles. Amplifers capable of covering an even greater distance will be available in the first quarter of 2006. The cost for an assembled VHF or UHF transmitter and antenna system with an effective radiated power of 75 watts is $750, ($550) as a kit (cost of kits & modulator) and $850(kit) / ($1250 (assembled) for a system with an effective radiated power of 400 watts. Coverage pattern is 120 degrees, not fully omni-directional. Higher power versions are available, please inquire. Further work is continuing on the development of antenna systems.

Check the store catalog for kits.  Any composite video source with an audio out signal can be used by the TV transmitters.  Click here for a typical TV broadcast configuration diagam. Typically, most folks will most likely use a multiple disk DVD player or a computer with video files on a large capacity hard drive.  Live broadcasts are certainly a possibility. This would require several video cameras and a video switcher/mixer.

A 200-disk DVD juke box style player would be able contain almost two weeks worth of material, assuming two hours per DVD. Considering the quantity of video material available, most of which will never be seen on either broadcast TV or cable/satellite feeds, there should not be any problem providing audiences with an exciting and compelling selection of material.

No doubt, the FCC, the National Association of Broadcasters and other entrenched interests will most strenuously object to Micropower or Free TV Broadcasting. What better way to respond to the total propaganda environment that has been created with television media.

Where it all began: FRB Founder Stephen Dunifer Broadcasting From The Berkeley Hills - Summer1993